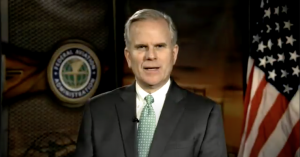 Elwell previously served at the FAA as the Assistant Administrator for Policy, Planning, and Environment from 2006–2008. Earlier in his career, he served as a legislative fellow for the late Senator Ted Stevens (R-Alaska). From 2013–2015, as Senior Vice President for Safety, Security, and Operations at Airlines for America (A4A), Elwell was responsible for leading the advancement of commercial aviation safety and security excellence for major U.S. air carriers.

Elwell was a commercial pilot for 16 years with American Airlines, flying DC-10, MD-80, and B-757/767 aircraft. While maintaining his proficiency as an MD-80 Captain, he served as Managing Director for International and Government Affairs at American Airlines.

Dan earned his pilot wings at Williams Air Force Base in Arizona after graduating from the U.S. Air Force Academy with a Bachelor of Science degree in International Affairs. Lieutenant Colonel Elwell retired from military service as a Command Pilot with more than 6,000 hours combined civilian and military flight time in the U.S. Air Force and U.S. Air Force Reserve, including combat service during Operation Desert Storm.

He currently serves on several private and public boards, including Alaska Airlines Group.